Succession planning is becoming a higher priority for many companies, even though most don’t feel they have a sufficient pipeline of candidates to fulfill their needs.

About 70 percent of companies say they participate in at least some form of succession planning, be it comprehensive or piecemeal, according to a 2014 succession planning survey by Human Capital Media Advisory Group, the research arm of Talent Management magazine.

The HCM survey included 137 respondents who are human resources professionals from companies of varying size and industry.

On average, organizations included in the survey said they spend about 10 percent of their talent management budget on succession planning.

Just 14 percent of organizations with more than 10,000 employees don’t have any succession plan, the survey found.

Most small companies without succession plans in place say they simply don’t have enough employees for one. Others say the lack of succession preparedness relates to a startup mentality or a purposefully designed flat organizational structure, according to comments included in the survey. 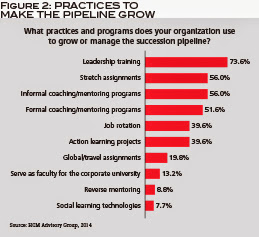 Among the skill criteria companies report using in identifying an employee as a high potential, business acumen tops the list (47 percent), followed by ability to grow and succeed (46 percent), cultural fit (45 percent) and strategic thinking (41 percent).

Among the skills least taken into account in identifying high-potential talent are prior management experience (16 percent), emotional intelligence (14 percent) and educational attainment (11 percent), according to the survey.

By and large, the way organizations identify the skills that make an employee a high potential is the performance management process, as 84 percent of organizations surveyed report using the method. That’s followed by soliciting the opinions of managers (64 percent), networking (41 percent) and personality assessments (24 percent).

When asked what segment of the company has the most involvement in organizational succession planning, nearly 80 percent named human resources as being most involved (Figure 3). That was followed by the C-suite (61 percent) and the board of directors (42 percent). 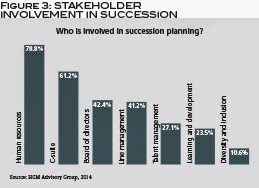 Companies still have reason to go outside their walls when it comes to building a succession plan, according to the survey. When they do this, companies say it’s mostly because they are looking for someone with particular expertise. Other instances when a company might hire externally to fill a gap in its leadership pipeline are when no one has been groomed internally (51 percent) or the organization needs greater diversity (38 percent) (Figure 4). 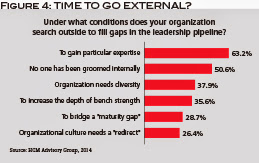 Overall, the survey showed that diversity and inclusion is somewhat integrated into the succession planning process, while performance management is the most completely integrated talent management practice.

For smaller firms — those with fewer than 1,000 employees — time taken to be fully operational in a new role is the most important metric of success.