Even as a teenager, David Kuhl was accustomed to providing support and advice, but the choices centered not on learning but on what driver or putter to use while he was a caddy on golf courses in Minneapolis. Kuhl later attended the University of Minnesota, Twin Cities, where he studied economics as part of the Evans Scholars program, which provides full scholarships for the nation’s most deserving caddies.

He never intended to enter the learning and development industry, opting instead to earn a law degree and practice employment and labor law in San Francisco and Minneapolis for 15 years. After a decade-long stint as an in-house attorney working on mergers and acquisitions, human resource outsourcing, compensation and employee relations at UnitedHealth Group, the parent company of the single-largest health care carrier in the U.S., Kuhl caught the HR bug.

“I just found HR really an exciting and rewarding area,” he said. “And I didn’t have to work with lawyers every day, which was nice.”

“David is a really smart guy,” Boucher said. “He’s a self-starter, he just takes amazing initiative. This was not his area of expertise, but he took it upon himself to significantly network himself into the community.”

The ability to acclimate to new situations and roll with the punches proved imperative in Kuhl’s biggest project to date as CLO: implementation of MindSpring — a virtual corporate university — and the construction of a 10,000-square-foot learning and innovation center at First Data’s headquarters in Atlanta.

Turning Lemons Into Lemonade
When Kuhl took over as CLO at First Data, it had been nearly a decade since the company had conducted an all-employee survey. Kuhl and Boucher used the introduction of the corporation’s new CEO, Jon Judge, in September 2010 to push for one. The results were mixed, particularly regarding employee development and learning.

“It wasn’t a pretty picture,” Kuhl said. “HR over a couple-year period took a back seat, and we sort of drifted away from some of the programs that had been in place.”

Instead of lamenting that learning scored lowest in employee development in the survey of First Data’s 25,000 worldwide employees, Kuhl and Boucher saw the findings as the impetus for dramatic change.

“I knew the survey would highlight a couple of things,” Boucher said. “To me that was just going to put it into big headlights for the executives and CEO to realize that we’ve got to do something.”

Judge embraced the results, and championed the findings as cause for innovation and implementing a new learning program.

“He genuinely and authentically embraced the fact that our lowest dimension on employee development was good news,” Kuhl said. “The message that he got from the survey was our employees want learning, they want to stay at First Data, and they want us to invest in them.”

A Blank Slate
In the late 1990s and early 2000s, First Data had an organizational development and training function of almost 40 employees. However, the department was unable to show the necessary return on investment for its costly programs, so in 2005, after a series of acquisitions, most of the existing learning modules were discontinued.

With little structured learning and development in place, Kuhl was able to start from scratch.
“We really had a blank sheet of paper to say, ‘If we could fast forward our employee development, our leadership programs, our talent management processes in concert, at the same time, what would we do and what would that look like?’” he said.

“I went on LinkedIn and Facebook and just threw my post out there to see how others have done this successfully,” Kuhl said. “Within two days of my post, I was the most popular guy for two weeks straight.”

A native Midwesterner, Kuhl drew comparisons between the collaborative process of crowdsourcing for insights into development of a global university and another community construction process.
“It’s like community barn building,” he said. “People have great experiences building these universities and they like to help. They’re learners. They’re teachers, and it’s sort of in their DNA.”

After soliciting advice from the outside learning community, Kuhl came back to First Data and organized a group of 65 leaders throughout the corporation who now serve as deans and steering partners of MindSpring’s five academies: leadership, technology, sales, general business and product. In this role, the leaders create curriculum and map the learning architecture for their individual academies, solidifying Kuhl’s belief that practitioners are best at determining what their colleagues need to know.

Take the sales team, for example. First Data markets more than 100 products. The sales team collaborated with the product group on 11 learning modules on MindSpring to better facilitate sales representatives’ understanding of how products can work in conjunction with one another and provide additional value for customers.

The virtual university, which opened this March, now includes 6,000 learning assets and 20,000 books available electronically. Any employee can access MindSpring from an Internet browser in any of the 45 countries in which the company operates.

When building MindSpring, Kuhl and his cohort were intent on making the learning environment engaging and entertaining.

“I’m the first person to say I can’t stand compliance training, and I try to get through those things as fast as I can,” Kuhl said. “For most people, if it’s not engaging and it’s not relevant, they’re just not going to do it.”

MindSpring incorporates gamification, social media and videos by employees to stimulate interest among users of the virtual university.

So far, MindSpring has been well received by First Data employees. At the beginning of 2012, the company conducted a pulse survey, which found utilization of learning products increased 350 percent in the nine months since MindSpring was introduced. Further, the employee development dimension increased 20 percent, the highest increase of any dimension measured.

“I have literally been around the world since we opened MindSpring, and it’s an absolute home run,” he said. “Employees felt we listened to them and took it to heart. They thought it was extremely creative, and it quite frankly floored a lot of people with not only how quickly it was done but also how well it was done.”

When reflecting on MindSpring in its first year of implementation, Kuhl said he gets “Pollyanna-ish about what’s happened. We lost our way a little about investing in our people and investing in our leadership. We still had business success, but culturally, we had opportunities.”

Brick and Mortar
MindSpring, the virtual corporate university, will act as the focal point for First Data’s new learning and development program, but the company also began construction of a seven-room learning and innovation center that can accommodate up to 300 employees at its headquarters. Before employees walk into the center, they will pass a 60-foot wall adorned with more than 600 patents issued to First Data. Kuhl said these showcase the clear connection between learning and innovation. 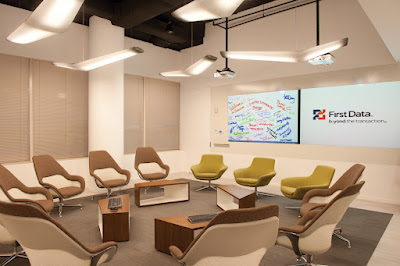 He spearheaded development of the learning and innovation center, which opened in August and is viewed as a physical manifestation of First Data’s commitment to learning.

“As learning and HR professionals, we know not all learning is most effective in the modality of virtual or self-paced,” Kuhl said. “Face-to-face learning is an important part of our strategy, in particular with our executive and senior leader learning.”

Similar to the crowdsource model used to develop MindSpring, Kuhl visited a number of different universities as well as Silicon Valley innovation labs to talk with individuals who work in adult education when he began the development of the learning and innovation center.

First Data settled on nontraditional classroom designs with no clear front of the room for the instructor to stand in. The various layouts encourage instructors to move fluidly throughout the space and stimulate interaction and innovation for the learners. 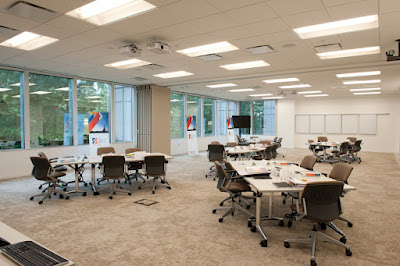 “In most spaces, we’re leading the market, but we also know garage bands are coming up all over the world,” Kuhl said. “All of a sudden there’s a new technology where you put a little thing on your iPhone and you can do transactions without going through First Data. That’s the sort of muscle we’re building through the innovation lab, and that’s why we really try and tie learning and innovation together.”

Kuhl worked with Emory University’s Graduate School of Business to develop E1, an executive leadership course that takes place in the learning and innovation center. The two-week program is designed for top talent with a specific focus on First Data’s business challenges related to growth goals. In the first week, participants learn about organization challenges such as competitive advantage, innovation, globalization and the service-profit chain. Week two centers on personal and team leadership and includes a full-day rowing competition with former Olympic athletes to stimulate leadership principles.

Learning From the Past
The success of MindSpring and the learning and innovation lab have made Kuhl and Boucher bullish about a new era of learning and development at First Data. But the two said they are taking lessons from First Data’s past and advocating for cautious growth of the company’s learning assets.

“One of the sins of the past both here and at a bunch of companies is you go and build all of this stuff out, and it kind of dies of its own weight,” Boucher said. “So we’re holding ourselves accountable to say there’s got to be proof points. There’s got to be metrics.”

For human resources, these metrics come in the form of Talent Development Reporting Principles (TDRP). Kuhl has helped lobby First Data to be one of five companies to pilot the TDRP program, an industry-wide effort to bring credibility to human capital work. Kuhl said finance has standards of measurement, and human resource professionals across the board feel it’s time to institute similar methods in the HR field.

Metrics are also important on a localized level for First Data, which plans to go public within the next two years. Kuhl said as a public company, the return on investment for learning programs needs to be clear. But after much research, looking at the 20 most successful IPOs in the last 15 years, he said there is a clear, positive connection between investments in leadership and talent and a strong de-leveraging event.

Even before the company goes public, the learning programs have already helped to dramatically shift the First Data brand.

“I’ve only been here two and a half years, but we are literally changing the way we are facing the market and our brand,” Kuhl said. “We used to be an old payments processor and we are consciously and overtly changing that. … This tie to innovation is huge because in our space, innovation and change is necessary to succeed.”