Twenty-four-year-old Harsh Patel received his bachelor’s degree in biomedical engineering from Saint Louis University. After graduation, he joined Teach for America and taught fifth grade for one year and eighth grade math and science the year after. Throughout his own education, something was missing. When teaching, that something grew bigger.

Patel saw a disconnect in education, and he began blogging about it. When nonprofit educational organization Khan Academy was just starting, he used its tools in his classroom and blogged about his experience for other primary education teachers who were interested in implementing online learning in their curriculums. Peter Kuperman, who was a volunteer coordinator for Khan Academy at the time, found Patel’s blog, and together they began to build the Teacher Toolkit for Khan Academy.

Once his contract with Teach for America ended in 2012, Patel didn’t apply for jobs.

“I think this is one of the few times in my life where I can take a risk, so I decided to take it,” he said. “I wouldn’t come close to having the opportunities I have now at an established company. I’m meeting people I’d never meet otherwise. It’s pretty sweet.”

What he’s doing now is growing portfoliyo.org, a website he founded to help teachers communicate with their students’ parents via text. He has hired three Web developers, kept Kuperman on board and is creating a work environment he doesn’t think Gen Y can easily find in today’s corporate world.

Larry Bock, founder and organizer of USA Science & Engineering Festival, said these are common sentiments from a millennial and are why he has always favored startup cultures. For 30 years Bock started 30 different life and physical science companies worth $40 billion, but he eventually had to call it quits. He said he couldn’t recruit young Americans to the high-tech positions he needed and didn’t believe in outsourcing innovation.

“You get what you celebrate,” he said. “In the United States we celebrate Britney Spears and Lindsay Lohan, so we generate a lot of them, but we don’t celebrate science and engineering.”

Bock was first introduced to science festivals while in Europe and created a similar, local event in San Diego in 2008. His lead sponsor, Lockheed Martin, challenged him to make it a national event. For the past two years he has held the event in Washington, D.C., presenting interactive hands-on science activities to children of all ages with the goal of generating scientific excitement and awareness.

“Young people are like soldiers,” he said. “You can never convince a middle-age person to march into battle, but young soldiers are fearless. In some senses they have blinders on, but in another sense they’re not blinded by conventional barriers. If you develop these people properly, teach them and steer them in the right direction, you’re adding a lot of potential to their future and your organization.”

Leaders at Qualcomm, a mobile, computing and connectivity technologies company, have their minds on their youngest employees. The company offers a Backpack to Briefcase program as part of its on-boarding for Gen Y to help them develop essential business skills as they transition from a college to corporate campus.

Through the program millennials also can network with other millennial hires to select roommates if they have recently relocated to San Diego, discuss their new positions and read about career opportunities and how to connect with senior leaders.

“We have an open-door policy that is very important to us,” said Tamar Elkeles, chief learning officer at Qualcomm. “Anyone in the company can go to our executives at any time. That’s part of what we believe our next generation really wants — access to information, access to leaders and their voices to be heard.” 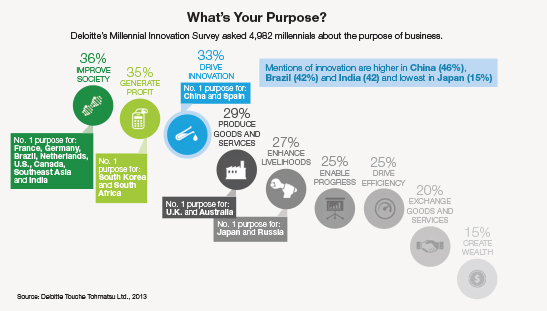 Once a month Paul E. Jacobs, Qualcomm’s CEO, holds breakfast meetings with employees across the organization who are at a non-managerial level — most often Gen Y. He also participates with the Qualcomm Innovation Network, an online program where all employees can submit ideas which are peer-reviewed and used to create new business processes, technologies and products.

“One of the things we realized a long time ago is that it’s really important to make sure people, especially younger employees, have an opportunity to share ideas and have those ideas turn into business realities,” Elkeles said.

Qualcomm rewards its employees monetarily for their ideas by recognizing them as Qualstars or Super Qualstars — a $1,000-plus reward. Any employee can be nominated by anyone in the organization.

Like Qualcomm, aerospace and defense company Rockwell Collins has a recognition tool to reward employees. Employees in certain business units nominate other employees they have had a positive experience with or foresee a lot of potential in, and leaders have budgets set aside to reward innovation in nominated employees. The company also spotlights employees of all ages in its Engineer of the Year — which a millennial has won — and Chairman of the Year — an innovation award — each year.

“To help fuel innovation, we see the Gen Y community as being a critical component of helping us create innovation for our organization and do not think of them from a traditional standpoint of having someone that we go put at a desk and say, ‘File for the first two to three years of your career,’” said Joy Fitzgerald, director of diversity and workforce effectiveness for Rockwell Collins.

To boost career growth for its youngest employees, Fitzgerald’s team has developed speed mentoring opportunities where CEO Clayton M. Jones and a large percentage of the company’s executive team target a particular population of individuals who are meeting their current work goals and have an interest in development — in January it was the millennials’ turn. Each employee in the group spends four or five minutes alone with each senior leader to discuss his or her development.

The company also has a matrix process that promotes creation of diverse teams engaging multiple generations, work experiences, tenure and domain knowledge. Teams have an opportunity to vet ideas and approve or veto them, eliminating the hierarchical structure of which many Gen Y members aren’t fond.

“We invite Gen Y to the table, and our matrix model and how we make decisions within the company helps individuals understand that when you come work for us, from day one, we’re hiring you for your creativity,” Fitzgerald said. “We want to hear from you, and we do not see your age as a barrier, we see it as a strategic advantage in helping fuel innovation and success within our organization.”