While it is now more than four decades old, the concept of cloud computing was until recently largely the domain of a cadre of computer scientists and software engineers. It has since burst into the mainstream, driven by the development of innovative tablet computers and the widespread consumer use of mobile devices. Learning design and delivery is changing as a result.

Cloud computing, loosely defined as the delivery of software, services and data resources over the Internet rather than as a product on an individual computer, was introduced in the 1960s by now retired Stanford professor John McCarthy. In a speech he gave in 1961 at MIT, McCarthy suggested that computing might one day be a utility like electricity or water, widely available and shared by many.

As this report on learning technology will show, the trickle of cloud technology for employee learning is turning into a flood. Corporate learning and development budgets are dammed up, with many organizations keeping their spend on learning technology steady, if not shrinking it. At the same time, today’s increasingly virtual workers, stationed around the world from Sydney to Shanghai, San Francisco to St. Louis, need learning available at their fingertips at the immediate point of need. Their performance, and that of their organizations, increasingly depends on it.

The result is a partly cloudy forecast. Budgets may look gloomy but rays of opportunity are breaking through, primarily in cloud-based technology and increasingly sophisticated apps that make learning available whenever and wherever it’s needed.

Learning and development took a beating during the recession, and the frigid climate caused many learning leaders to step back, if not cut back, and rethink how they deliver learning. As a result, even with the Great Recession over, the amount of money organizations choose to spend on learning technology is diminishing. The challenge many companies face is trying to keep their regular sales and marketing strategies afloat while training people to do more with less.

According to results from a survey completed in July by Human Capital Media (HCM) Advisory Group, the research arm of Chief Learning Officer magazine, 39 percent of companies surveyed reported some decrease in tech spending in 2012 (Figure 1). Forty-one percent of companies do not anticipate making any changes due to the current economic environment, and 20 percent of respondents cited a budget increase for 2011 and 2012. But while organizations are minimizing budgets, they are adapting to economic restrictions by maximizing the quality of learning delivered using new platforms.

Leaders can’t just stop development due to lack of funding. Apart from its ongoing value to the business, learning options send a strong signal to employees that their development remains a priority, which aids retention. To remain fruitful yet financially cautious is top of mind for organizations, however. Forty-eight percent of respondents to the HCM survey said the need to increase productivity, reduce costs and still provide superior service levels will be their greatest learning and development challenge moving forward (Figure 2). 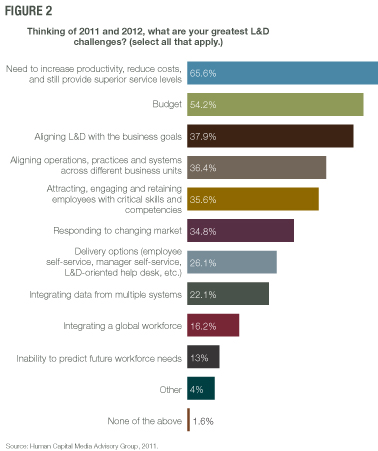 This targeted efficiency is still being pushed through traditional learning management systems (LMS). When asked to rank the top five areas for tech spending in 2012, approximately 68 percent ranked the LMS as a top priority in their budgets (Figure 3). This is a small drop from 2011 spending, where 70 percent of respondents placed their LMS as a priority. But the use of the LMS is evolving. It is no longer a stationary software application. 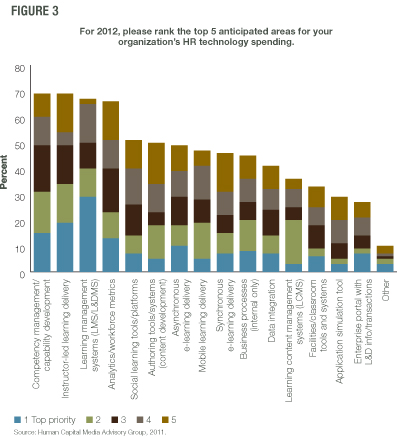 Traditionally, when learners save a course they’ve taken, course information is transmitted to servers. Most information is stored in the relational databases associated with the LMS server, and anything not located there can be found in local files. Learning this way is fluid, but it’s not remote.

Making information stored in the LMS more accessible will decrease spending and increase impact. Typically, when an LMS is installed, different departments, people and vendors have to conform to it. This can be difficult as stakeholders may execute processes in their own way. To be able to track and improve all e-learning, organizations have turned to Web-based LMS applications, which provide instant, 24-hour-a-day access and flexibility in pricing.

When asked where they have deployed SaaS technology, 38 percent of the HCM survey respondents cited their learning management systems. Twenty six percent said asynchronous e-learning delivery and internal business processes and 22 percent said analytics and workforce metrics. Almost half — 47 percent — of all SaaS deployments are hosted by a vendor using licensed software, according to survey results. Thirty seven percent are deployed with a subscription, 23 percent are deployed in house, and 22 percent are installed with licensed software on the premise.

Learning leaders are looking to increase productivity and cut costs while providing users with the skills they need in an engaging and time-efficient format. As evidenced by survey data, they are increasingly reducing internal software management activities, capital expenditures and overall cost of ownership to meet this need. The budgetary constraints that are forcing companies to change are also causing the training vendors to adapt.

Results from the HCM survey indicate that product features are often mentioned as the top consideration when choosing a vendor to work with. Ease of use and pricing are also listed as top-five considerations. With less money to go around, companies that offer corporate learning programs are being forced to adapt to the market and offer on-demand software that is centrally hosted and easily accessible.

Ladan Nikravan is an assoaite editor at Chief Learning Officer magazine. She can be reached at lnikravan@CLOmedia.com.