It is commonly recognized that companies often need effective training programs to transfer knowledge and skills to employees, customers and partners; to retain employees; and to improve speed to proficiency. The approach to that knowledge transfer can vary: Training programs can be grown organically over time, developed in-house, outsourced to a training provider or implemented using some combination of in-house and external expertise.

The decision to outsource often rests on whether internal staff can support the needed volume and quality of training. Overall, enterprises that outsource training are satisfied with outsourcing and expect to maintain or increase spending levels slightly for 2012. According to data from a January 2011 Human Capital Media Advisory Group survey on training outsourcing, more than 50 percent of enterprises use an outside provider to augment some part of their training function (Figure 1). Most often, enterprises use external vendors for content development, training delivery and training technology management.

Training outsourcing is the ongoing transfer of the management and execution of one or more complete training processes to an external services provider. However, it is clear from the survey, conducted in partnership with IDC, in the past several years, this is not the marketplace’s current use of the term. The types of training activities being purchased suggest enterprises use the term training outsourcing interchangeably with any use of external training providers. For the purpose of this article, we will adopt this broader usage of training outsourcing for analysis.

While the challenging economy was a significant driver of the downward trend, it is likely an equally large driver of the recovery. As companies begin to recover, the urgency of training is rebounding from its nadir during the difficult economic crisis. Enterprises leverage external providers to deliver more training than internal resources can provide while gaining access to better training expertise and controlling costs. The recovery of the use of outsourcing should have been predictable because benefits from and satisfaction with training outsourcing have remained remarkably consistent in the past several years. 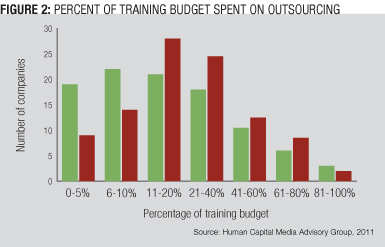 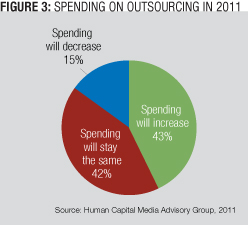 The activities that CLOs identify as most important include both custom content design and development and training delivery. Also important is strategy development, with program oversight and learning technology management following with about equal importance. The importance of activities hasn’t changed much during the past several years, suggesting overall priorities haven’t changed much, either. Figure 4 compares the importance of training functions with the training functions most frequently outsourced. The relationship importance of the activity and activities outsourced for the three areas of custom content, training delivery and LMS is obvious. Training functions that are highly important but require the transfer of management responsibilities to execute, such as strategy development, program oversight and reporting and measurement, show a lower popularity for outsourcing.

Companies are using external training providers primarily for activities that are important but do not require the transfer of management authority.

While other aspects of training outsourcing have only changed slightly, the reasons for outsourcing have shown a significant shift. In the past, companies chose outsourcing to gain access to better training expertise, and to deliver more training than internal resources could provide. These reasons remain consistent with last year.

As recently as 2007, speed to market was a significant rationale for using external providers. During the past several years the importance of speed to market has declined. Even as organizations seek to rebound quickly from the economic crisis, they are less likely to leverage external vendors as a way to get essential training delivered quickly.

Companies that are outsourcing training functions primarily to supplement internal resources do so to have training resources available on an as-needed basis and because they think training outsourcing is a more cost-effective method of creating or delivering training.

The most important qualities CLOs consider when looking for a training outsourcer are training expertise and subject-matter expertise. These are the fundamentals for providing high-quality training services and knowing how to impart knowledge to the audience. Growing significantly in importance is vendors’ ability to act as business partners, which reflects an increasing understanding of CLOs on the fluid nature of training objectives and the mutual flexibility required for successful training outsourcing.

From 2006 to 2007, HR executives became more active in the decision-making, even more so than the CLO or head of training. More recently, however, CLOs and heads of business units have taken on more decision-making authority, which places the responsibility for the business impact of learning and training outsourcing squarely on the shoulders of those impacted by the decision (Figure 6).

Training outsourcing remains a well-established service. The key findings from this survey include:

1. There has been a small increase in the number of enterprises that plan to outsource and the amount companies spend on outsourcing.

2. Companies that outsource are satisfied with the results and expect to increase or maintain their levels of spending with external training providers.

3. Most buyers who outsource choose activities that do not require the transfer of management control to an external provider.

Companies that don’t outsource typically cite satisfaction with their internal training operations, think it is too expensive or believe the subject matter is too complex for outside providers. As enterprises continue to emerge from the economic crisis, will the increased use of external providers hold true, or will organizations attempt to bank their savings on using external providers and attempt to continue to do more with less?

Cushing Anderson is the program director of learning services at IDC. He can be reached at editor@clomedia.com.